. . . I have one more, if you are lucky, two if unlucky, football stories, left to post.

The dreary Black Eyed Peas have promised us that  “tonight is going to be a good night” and why should I ever believe them?  But then, Slash, from Guns n Roses, turns out to be the hit of that slot with his so tender rendering of Sweet Child Of Mine.

The Packers have dropped the ball, Jones having been thrown the ball from Rodgers. Perhaps this is the time to talk about the hair.

Troy Polamalu for the Steelers

and meet Brett Keisel for the Packers 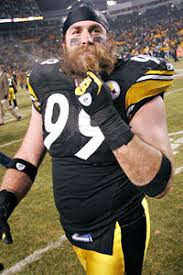 who has felt the winning streak since June –

Those horrible yellow and black towels are waving in the air and the Steelers fans are getting excited.  Actually, it does not take much to get anyone from Pittsburgh excited. This is what fans commit innocent newborn offspring to in Pittsburgh 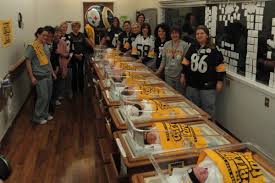 If only the Israelis and the Palestinians played football.  Peace, maybe, in the Middle East?  Could it be this simple?

Condoleeza Rice is at the Super Bowl in Dallas!  She, a famous football fan, is looking happy!

Tonight’s camera, we have been informed, is sponsored by Budweiser.

Final ten minutes, Packers are in the lead but do I trust those rusty Steelers to not steel the game?  Who have just come in with a touchdown . . .  why is the final seven minutes always so much of a trauma drama? Will an understanding of these dynamics grant me citizenship when all I thought I needed to know was that America runs on Dunkin’?

Nelson, for the Packers, drops the ball . . . again with just over two minutes left.

The Fat Lady is singing and the Green Bay Packers have won the 45th Super Bowl.  The Lombardi Trophy is coming home.