Michele Bachmann and My Minnesota Blues

Before Minnesota congresswoman Michele Bachmann announced her intention to run for the Republican nomination in the 2012 Presidential campaign I came across the headlines Fresh Scrutiny as Bachmann Surges from the Washington Post.  But that was long ago and any hopes of Michele Bachmann keeping her surging urges to herself have long since disappeared. 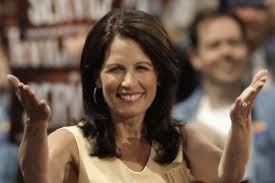 Fuss and bother follow her in equal measures. She strides through it all with evangelical confidence and zealotry, her husband and top advisor Marcus, who has become something of a YouTube  sensation, by her side.

Marcus, a mixture of Nathan Lane and Cam from Modern Family, is so delightfully camp.  Which on its own is no big deal.  If a butch man can be gay, why can’t a straight man be whatever?  What high-powered woman intent on world domination would not appreciate the felicitations of a devoted husband who shops for her, cares for her and guides her through her ambition?  Marcus, however much of a Broadway wannabee he may be, has a day job of his own, counselling poor sods through “reparative” therapy in the attempts to cure them of being gay.  With God’s help and much prayer.  This practice has been repeatedly denied by Marcus and completely ignored by Michele.  It is now the subject of an undercover expose.

Also this week we have the news that Michele signed up for The Marriage Vow: A Declaration of Dependence Upon Marriage and Family.  Which Newt won’t, or can’t, sign!   The clause about how African-American families were better off in the slavery of the South than they are today under President Barack Obama reached a new high in how low to go and has since been pulled from the declaration. Editing tools!  Where will history be without them?

All of which reminds me of my Minnesota blues.  I have spent enough time in Minnesota to know I will never understand it.  I have met and spoken to more people from Minnesota than I have to people in Minneapolis / Minnesota. No bar talk, no small talk, no nothing.  The closest I have come was one afternoon downtown in Barnes and Noble where chatty people sat at nearby tables, on their own.  Talking to themselves.  The cashier commented, either to me or to himself I don’t know, that this place was funny enough to write a sitcom about!

Outside, on the street in Nicollet Mall stands a bronze statue.  Mary Tyler Moore, aka Mary Richards, fictional resident of Minneapolis in her sitcom of the same name.

Turning the world on with her smile, the promise was that she was going to make it after all.

Michele Bachmann leads in the Iowa poll.  She is surging now and she has the confidence to think she might make it after all.

Tell that to Hillary Clinton!

10 thoughts on “Michele Bachmann and My Minnesota Blues”