Last week, domestic goddess Nigella Lawson made a magnificent splash in the warm waters of Bondi Beach. Wearing a burkini. Photos of her appeared all over the front pages of  the UK dailies and across the internet. 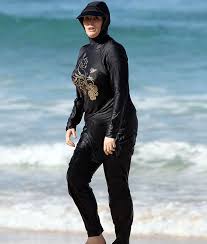 Nigella’s splash provided a temporary shift from the so many details which continue to pour forth on the up-coming royal wedding, and, as is usual here, female columnists came out with pens blazing, making comments and giving opinions with all the wisdom of braying Solomonettes.  They did the same the week before with the news, also front-page, of Catherine Zita Jones’ diagnosis of Bi-Polar 2.

Moving firmly into the week of the big wedding it is reassuring, or otherwise, to discover with today’s blazing headlines  – London: hub of al-Quaeda‘s global terrorism network  that an Al Qaida assassin “worked for M16″ . Note different spellings of AQ.  Elsewhere, according to the Real IRA, the Queen’s visit to Ireland next month is an insult – Masked member of Real IRA says at rally to mark 1916 Easter Rising that the Queen is ‘not wanted on Irish soil’.

In Syria, tanks have been used to fire on people and in New York, Donald Trump has declared that Obama did not have the necessary qualifications for Ivy League.  All remains steadily topsy-turvy in the big world.

Diana’s absence from the wedding proceedings hovers as an invisible presence over Friday’s big wedding.  Speculation has ranged from her possible approval of Kate as a daughter-in-law to possible envy in the competitive field of high publicity stakes. And, as mother of the groom, would her outfit upstage that of the bride’s?  Where would this put Camilla in the seating stakes?

This remains high pie in the sky speculation when compared to the more weighty matters of the style of the wedding gown, will her hair be up or down, will the groom be in military uniform, will Mr and Mrs William Wales be given a Dukedom, will Harry be sober?

What we do know is that Prime Minister David Cameron has decided to wear a morning suit after earlier announcing he was planning to wear a lounge (dirty word here in some circles – see Nancy Mitford for U/Non-U translation) suit.  Tony Blair and Gordon Brown have not been invited! Kate/Catherine’s local village butcher has been invited as have the postman, the landlord of the local pub and the couple who run the village shop, Hash and Chan Shingadia who “always stock mint Viennetta, a favourite with the Prince, for when he is in the neighbourhood.”   Mrs Shingadia is wearing a sari on the big day,  she has the palace approval to do so.

I know all this, and so much more, because I have my souvenir Guide to The Royal Wedding from one paper along with The Ultimate Guide To The Royal Wedding from another in which the historian Amanda Foreman has declared “the royal wedding is the perfect fairytale ending not just for the Prince and his princess-in-waiting but also for the monarchy and the British nation.”   I have yet to pour through the so many details but I offer it to you for relaxing perusal.

What we do not know is will the brilliant spring sunshine continue and bless Friday’s ceremonial phantasmagoria of pomp and circumstance?

More, so much more keeps coming in through the door . . . 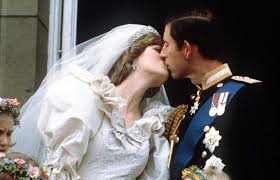