Former Speaker of the house, he is considering running as a candidate in the 2012 Presidential race. Announcing recently the launch of an “exploratory phase” Newt is testing the warmth of the water that is the public opinion from his website,  Newt’s Org 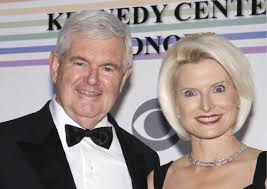 Have fun exploring the delights of shopping at the red, white and blue of newt.org!  And such a pretty, devoted wife to whom I am sure Newt gives thanks for providing him with further inspiration to go out there and make America a better place.

A prime baby boomer, he was born in 1943 to teenage parents who named him Newton Leroy McPherson. For some reason his mother was left to bring Newt up on her own until eventually marrying Mr Gingrich, a military man, who adopted the three-year old Newton Leroy. He has half sisters, one of whom Candace, is a prominent spokesperson for gay and lesbian rights.

At the age of 19 Newt married his 26-year-old geometry teacher with whom he had two daughters.  Marriage, fatherhood and continuing education presumably kept him out of the draft for the Vietnam War. Religion, baptised a Baptist while studying for his Ph.D, and politics followed with his election to Congress as representative for a district in Georgia.

Politics is such a fascinating beast and power an intoxicating brew for those drawn to the well. The intrigue, the machinations of self-advancement and the defeat of the weak and the ineffectual become part of the routine.  Wives who stay at home in other parts of the country with the children are never part of this routine, not while the spouse is in Washington pursuing the American Dream by which all Americans must live. If so fortunate enough.  The first Mrs Gingrich never stood a chance.  Newt divorced her while she managed her cancer treatment and Newt went on to marry the woman with whom he had an affair.

Common wisdom has it that marrying one’s mistress immediately creates a vacancy. Newt was no exception, and, as Speaker of the house during the impeachment furor over President Clinton’s activities with Monica Lewinsky, not the actual activity but rather the lying about it, Newt was having another affair with a House of Rep staffer. Not only was Callista Bisek a married woman, but, Callista is very Catholic. Obviously her faith is very important to her and no doubt God guided her through the traumas of infidelity and divorces to give her and Newt a life of mutual understanding and happiness together.

They married, (opening up yet another vacancy . . . ) and Newt has since converted to Catholicism. Newt is not quietly saying his prayers and simply taking the plate around at Sunday Mass.  He and Callista went to Rome, to St. Peter’s where they met with the Pope and spoke about the experience  to Dan Gilgoff.

I am not so sure that Newt will run for office. His exploratory research will keep him in the public eye long enough for him to think his voice needs to be heard, funds will be raised and books will sell.  An older Republican is not going to win against Barack Obama.  The religious heartland of the country likes a man, perhaps one day a woman, who knows his mind and sticks with it. Stick with your spouse and stay in the church pew in which you were raised.  Bill and Hillary are still together!

Gov Chris Christie (R) of New Jersey is one such man who knows his mind and he is busy saying “no way” to calls for him to run in the race for 2012.  Watch this space!

We know what made Forrest Gump run but I want to know what makes Newt run.  Has he been looking all this time for his father?