. . . admits the Rev Grant Storms, the New Orleans pastor arrested yesterday on obscenity charges. Married with four young children, he is not looking forward to having to explain to his children how naughty he has been.

A christian fundamentalist, he is famous for vigorously protesting against the annual Southern Decadence Festival in New Orleans and for hosting “The Reformer Radio Show.” Now he is famous for more, so much more.

No longer affiliated with any church he now runs a lawn care business. Yesterday he parked his van in the parking lot of a children’s playground to eat his lunch and relax.  The lawn care business must be far more stressful than I thought because one thing lead to another, and, not knowing what came over him he indulged in a spot of afternoon delight and began to indulge himself.  A concerned mother alerted the sheriff’s deputies to the developing situation. He had his hands in his pants and that is all he is prepared to say.  The rest of it is going to come out in court.

A press conference was held in the car park of the motel where he is in the company of pastors who are working with him. Admitting to a problem with pornography he is “praying family can find it within their hearts to forgive him.”

Gail Haggard remains married to the former Pastor Ted Haggard, who in 2005, was listed by Time Magazine as one of the Top 25 most influential evangelicals in America.  He founded the New Life Church in Colorado which started in his basement and moved over the years to bigger premises and a congregation of 14,000. A mega church.

Pastor Ted, however, had inner demons driving him to seek the carnal pleasures of another man while using crystal meth. Meanwhile, of course, the money for the New Life Church continued to roll in until Pastor Ted was finally busted after a series of denials and counter-allegations sputtered to a halt.

Attendance figures declined, the money stopped coming in and job losses at the church were real. Also substantial were the payouts to Pastor Ted to get out of town and not come back.  In 2007 he and his family moved to Phoenix, Arizona from where he petitioned for donations to the cause – the support of his family while he and Gail attended classes at the University of Phoenix. He also sold insurance.

With help from his restoration team, and, after much prayer and discussion with family . . .  they are now back in Colorado Springs.  Pastor Ted is back in the pulpit. 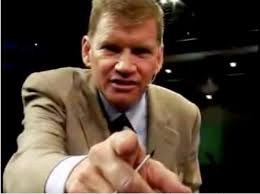 Pastor Ted, the gift who keeps on giving.  God sure does work in mysterious ways.  As indeed does Newt Gingrich.  More on him, later.
Interested in New Orleans?  Go to Best of New Orleans and thank you Kevin Allman.