In the week since the Jets saw off the New England Patriots in the play-offs for the AFC Championship New York City has worn a wave of green optimism.  What happened to all the blue Giants fans?  Where have they been hiding?

Almost to half time and the Jets have yet to score.  Steelers are up 24 points but I do seem to remember that it was at this point last week against the Baltimore Ravens that the Steelers came out from down at half time to blitz the Ravens all the way back to Baltimore. Not sure, however, that Jets have the necessary metal . . .

Temperature in Pittsburgh is 13 degs. Fahrenheit.  Wind chill of 5.  Again it is cold outside and players are playing with naked pink hams swinging from broad shoulders.

As for the famous Steeler fans, let Johnette Howard, supply the details –

I can go to town on Pittsburgh, but, as an outsider, what do I know? I do know how large and committed the fan base is.  We washed up in downtown Pittsburgh one Sunday afternoon in time for the Steelers to play the Minnesota Vikings. Tailgate parties, cheerleaders, cars coming in from one end of town to the other.  And where they all went after that I have no idea.  Downtown Pittsburgh can be a lonely place at the best, and worst, of times.

The Jets are not disgracing themselves, the score is now 24 – 10 but it has been a long day here on the sofa and concentration is waning.  The Steelers fans, so many of them in their black and yellow, waving their yellow rags in the air, are draining my limited energy, not helped by Mark Sanchez dropping the ball . . . and the Pittsburgh defense pushing back in the last few minutes.

Rex Ryan has thrown off his headphones, he knows it is now all over and Pittsburgh is going to the Super Bowl for the third time in six years. 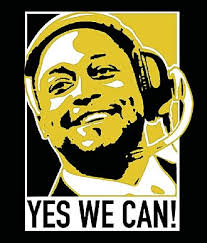