. . . and the New York Jets are taking off.  New England Patriots are down 3 – 14 and second half is under way.  I would not have picked this one but then what do I know?

In yesterday’s play-off between the Baltimore Ravens and Pittsburgh Steelers, at Pittsburgh, the Ravens were also flying high at the half-time point.  The Steelers came back from the change-room a team reformed, and, with iron-fisted brutality, the Ravens fell from the sky and feathers flew.  They never stood a chance.  All because of Big Ben Roethlisberger, the Steelers QB and nightclub wild child.  He of the Velvet Elvis.

Meanwhile, up in Boston now, balls are flying and tempers are fraying.  Tom Brady has been hit, going down to the ground on his right arm.  His throwing arm.  Those Jets, are they playing a tad on the dirty side or is this all part of the game?  Like I said before, what do I know?  I know I do not like pain and I suppose they know the drill.  And the dollars they earn to cushion such blows.

Score has moved the Patriots closer, much closer to the Jets shrinking lead. The tension, all these bodies, some of them verging on the fat side, falling over and on top of each other, is nail-biting.  Again, and so often, giving credence to the fact, some might call it a cliché, that it’s not over until the fat lady sings.  Or the referee blows his final whistle.

Jets coach, Rex Ryan, is looking pensive on the side-line. Rex is another fat man, famous these past few weeks for having had his foot fetish exposed.  None of this is attractive, least of all the figure that is the imposing and rotund Rex Ryan. Further investigation, quick peak into Wikipedia, reveals he was born in December, 1962. He has the manner, and physique, of someone born decades earlier, last seen sitting on the porch of the Shady Rest at Petticoat Junction with Uncle Joe.  Both of them looking kind of slow. 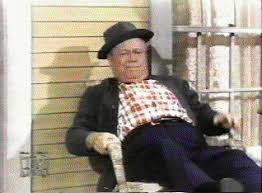 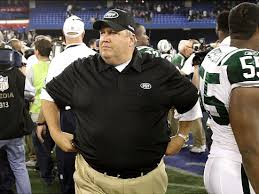 The Jets, with the game almost over, are in a comfortable lead now.  I see water in Tom Brady’s eyes.  Mark Sanchez, Jets QB, is now the new kid on the block and Jets are crowing.  Hell, they’re in Boston.  My Super Bowl dreams of Patriots V Eagles, who bit the dust last week,  are no more. I never saw the Jets coming this far.

24 secs to go. Patriots have scored and converted.

And the Jets meet the Steelers!