. . . is alive and well.  Up to a point. This is the night of Sunday Night Football.  The Playoffs. Somehow, Mark Sánchez and the New York Jets have seen off Peyton Manning and the Cincinnati Colts. The final score 17 -16.  The Baltimore Ravens are tanning the Kansas Chiefs but, sitting here in Devon, UK, I am not exactly sure from whence the Chiefs came. I didn’t see them on the horizon.

The big game, my big game and the one I would most definitely be tuned into if that were possible here in cold, misty Devon, is that between the Green Bay Packers and the Philadelphia Eagles. Who does not love the Green Bay Packers, excluding of course any one who follows those Vikings from Minnesota. The big grudge teams.

The line-up for the Eagles is good. Le Sean McCoy, dynamic offense

De Sean Jackson, the one with the ball and

Michael Vick, Quarterback and in the running for this season’s MVP.  What is there for me to say about Michael Vick that has not been said already?

A phone call to the Philadelphia owner from one Barack Obama has again put Michael Vick in the spotlight. It was a call of congratulations for having given an ex-felon, one of 700,000, a second chance. Michael Vick served time for unspeakable cruelty to dogs and the pictures are not pretty. One can only wonder, what went so wrong in the developing biochemistry of a child growing up in Virginia, in the projects, for this to happen? And for this to happen in someone so athletic, so balletic, so able to transform the sport of football into an art form?

American footballers play in the NFL by virtue of having come through the College football system. They have to have graduated from somewhere.  Their college is their calling card although the college, one of many, has come a courting the good players in their senior year at high school in Anytown, USA. The playing field is an equal opportunity arena, and, for so many, it is a pass into the green grass of the American Dream.

Not to forget another big dreamer of the week – Ted Williams 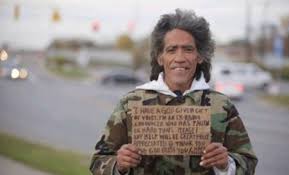 The American Dream.  Martin Luther King had it. And died for it. Basketball. Baseball. Football. They are only games but for so many they are the way into the dream.  The players and the fans.  And for Representative Gabrielle Giffords (D. Arizona) she was doing her best until . . .

The bullet?  Or the ball?

Barack Obama made a call.  He did it over a telephone.  As someone so famously sang, let’s give peace a chance.

The play-offs will always be with us. Year in, year out. And I still hope for a New England Patriots v Philadelphia Eagles, sorry Steelers.

And here is to Barack Obama and the Campaign of 2012. Get ready to make those calls.